Here’s a recent interview I did with Mike Perham for Seafarer Magazine. 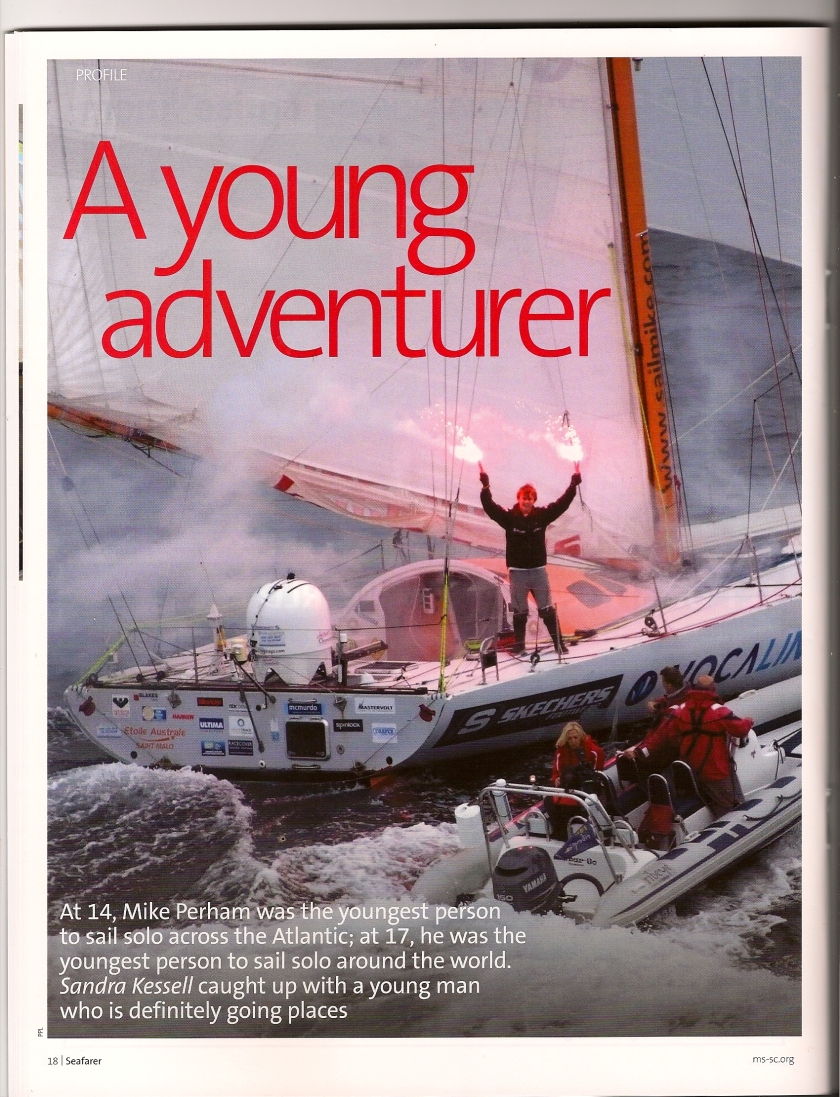 In common with most lads his age, Mike Perham is studying and has homework to fit into his schedule. Unlike most 17-year-olds, he has distinguished himself as a headline-grabbing world-class solo yachtsman, not once, but twice, before being old enough to vote.

“I do fit it all in because I have to fit it in,” he explains, though one suspects his college tutors are happy to give him an extension on a late essay when he’s setting world records.

If you’ve heard of Mike or watched internet video clips of him preparing to climb a mast in an approaching squall while telling the camera that he hates heights, you’ve probably wondered what makes him tick. The fact is, Mike’s an ordinary teenager with an extraordinary passion for sailing and that has meant, when facing the latest worst-case scenario he could have imagined, he’s just had to get on with it to succeed – or, possibly, to survive.

It’s a testament to Mike’s courage, determination and skill, that though none of the unfortunate events that beset his solo round-the-world record last year were unimagined, he set out anyway. If something could go wrong, Mike and his team of supporters had thought about how it could be dealt with. If the first watchword of being a record-breaking yachtsman is determination, the second is surely preparation. So how did Mike start sailing?
“I think I got into sailing when I was about six or seven. I loved it. My dad ran a boat building business and seeing them design and build a boat, then launch it into the water gave me a great understanding of boats,” explains Mike.

Sailing is all things to this youngster, who lives in Potters Bar, in Hertfordshire, and who is studying for a Sports Performance and Excellence Diploma at Oaklands College Athletics Academy in St Albans.

“I love the freedom of sailing. I love the freedom of getting away from everything. I love being in control,” he says.
To an outsider, the “being in control” Mike has in mind might be a loose term, since on his round-the-world challenge Mike faced 50ft waves in 50-knot winds. His yacht TotallyMoney.com was knocked over, battered and damaged and Mike had to overcome months of sleep deprivation, keeping himself focussed and eating 5000 calories a day to maintain his strength. He also had to dive under the boat to free up a rudder as well as the aforementioned climb up the mast to replace a torn sail – a little different to sitting in front of an X-Box.

“You do question why on earth you’re there a lot of the time,” admits Mike, “but I’ve always had a positive attitude… I set out knowing that it wasn’t going to be easy.”

So what does sailing, even something as relatively safe as sailing around the harbour with your local club, do for your life-skills?
“It teaches you perseverance, it makes you self-sufficient,” says Mike, who adds that it also teaches you patience and enables you to meet and befriend a broad spectrum of people from all age-groups and backgrounds.
Mike’s father Peter has been his champion and support, along with his mum Heather. They have sometimes been criticised by well-meaning parent groups who at best have seen their encouragement as misplaced, at worst, reckless and irresponsible. Not everyone thinks it is a good idea to allow a young teenager to take on vast challenges, as a recent court case involving Dutch youngster Laura Dekker has shown. Aged 14, she was barred from attempting to beat Mike’s round-the-world record, despite being backed by her father, Dick Dekker.
Mike remains diplomatic about the wisdom of allowing, or banning, such dreams to become reality, saying only that there are three pre-requisites for sailing solo under such circumstances, physical strength, technical know-how and mental toughness. Mike recognises his own development as he has become older and he expects to continue on his path of self-knowledge and expertise throughout his sailing career. Though sailing is his future, he also has a plan to go to university and study film production, an idea fired by the the film he pitched for Channel 4’s “Cutting Edge” documentary series. “Dangerous Seas For Boys” followed Mike’s struggle at sea and his family and friends’ lives at home throughout last year, with Mike shooting the footage on the boat.

“That’s quite different, of course,” he says, “but I really enjoyed making the documentary.”

So what other events is Mike looking forward to now he’s had his eighteenth birthday?
“I’d love to go to the Polynesian Islands,” he says. “I want to see Tahiti, that would be great fun.”
He may get his wish sooner, rather than later. It’s not even a year since Mike triumphantly crossed the round-the-world finish line, accompanied by Royal Navy’s Fishery Patrol Vehicle HMS Mersey and a Royal Navy helicopter, yet already he is on the brink of his next challenge. On April 28th, 221 years to the day since Captain William Bligh was cast adrift after the mutiny on the Bounty, Mike is scheduled to set sail and emulate the historic voyage. Along with Australian Don MacIntyre and two other adventurers, they will sail 4000 miles in an open boat, with no charts and not enough food, making their way from Tonga to Timor to raise funds for research into Motor Neurone Diisease at the Sheffield Institute for Translational Neuroscience (SITraN). As a recently-appointed ambassador for the Prince’s Trust, Mike hopes his exploits will inspire other youngsters to try sailing.
“It gives you a sense of adventure while you’re having fun,” he says.

This interview appears in the Summer 2010 edition of Seafarer Magazine, published for The Marine Society & Sea Cadets.

One thought on “The young adventurer”