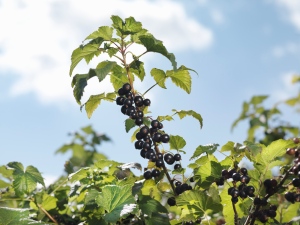 After listening with some pleasure to the news that Tom Archer, of long-running BBC radio soap The Archers, is promoting his organic pork sausages through HEFF – the Heart of England Fine Food Group – I thought I’d post this. I’ve been writing for HEFF and its producers for a couple of years now.

Small and mighty, blackcurrants were credited with health-giving properties long before scientific research could prove they were not only packed with Vitamin C, full of anti-oxidants and bursting with nutrients, but could also promote healthy vision, brain and kidney function, benefit the cardiovascular system and had anti-ageing properties.

On-going research into Alzheimer’s Disease, asthma and post-exercise muscle and joint regeneration ranks the blackcurrant firmly as a super-food. What’s more, they taste delicious! Sandra Kessell spoke to the new generation of Herefordshire blackcurrant growers who are bringing innovation to the fruit market and introducing ranges of blackcurrant-based products to the public.

Jo Hilditch took over her family’s fruit farm after her brother Johnny was killed in a car accident. She has blended her upbringing with her former PR and marketing career to develop new products for the twenty-first century whilst still growing the crops and managing the activities traditionally found at a family farm. It’s one of her newer ventures, however, that is enjoying some time in the spotlight. Around five years ago, after selling the usual blackcurrant harvest to Ribena, the farm had an excess of the fruit and Jo decided to make the French-associated drink cassis. Now her name is synonymous with British cassis. Though the first year’s techniques were rather rudimentary, the results were delicious and Jo and her team have refined the process and their know-how. Rather than distil the juice, Jo Hilditch British Cassis is made in a similar way to wine, resulting in a less cloying flavour and less syrupy consistency than its continental counterpart. “It’s much easier to use our cassis in recipes and savoury dishes,” says Jo, explaining that it can add a certain ‘je ne sais quoi’ to venison stews or gravy, for example. Now they are set to offer a whole fruit product preserved in cassis, capitalising on the fact blackcurrants’ thick skin makes them less absorbent, less alcohol-infused and full of fruity flavour. “It’s really exciting. This can be used as an ingredient in cocktails and you’ll get the berries in the bottom of the glass – a bit like a Pimms. You can top it up with a fizzy wine – it looks great – and obviously you can still use it in cooking,” says Jo. “We think it’s a British innovation – we don’t think it’s been done before.”

Though their family’s been farming for three generations Anthony and Christine Snell’s business started when they bought their own land to grow vegetables and salad crops. Over the years, they switched their expertise into fruit growing and now their blackcurrants not only go to Glaxo Smith Kline for Ribena, but also to Marks & Spencer. Anthony emphasises the benefits of buying British, traceable, sustainably managed and environmentally friendly fruit with fewer transportation costs and carbon emissions. In addition to their other fruit crops, 120 acres are earmarked for organic blackcurrants. “We take our very best fruit, very carefully harvest it when it’s at the right stage of ripening and within hours of harvesting it’s blast frozen,” says Anthony, revealing that the high-tech and very sensitive equipment processing individually quick frozen (IQF) blackcurrants cost the farm £70,000. It’s all far more delicate – and sophisticated – than pick-your-own to freeze at home – the fruit doesn’t go watery when defrosted and is perfect to use in yoghurt, jam and fruit-juice making. The blackcurrants are also sold under the Windmill Hill Fruits brand, marketed by HEFF, and there’s an online ordering service for next-day delivery. “They’re fantastic in a pie or cooked and served with crème fraiche but we’d like to find a new variety you really want to eat fresh and completely raw. That’s the ultimate but we haven’t got to that yet,” says Anthony.

Click here to discover more about the Snells’ British Blackcurrants

Edward Thompson didn’t join the family hop farm at Pixley Court straight from school – he studied mechanical sciences at Cambridge, travelled and returned to Herefordshire in the Seventies. New products, new processes and even new varieties of blackcurrant have ensued as Edward has gathered a dedicated team around him. Pixley Berries superfruit cordials are just part of the story. They contain a massive 60 per cent fruit juice, not from concentrate, capturing that quintessential summer flavour lacking in more sugary standard drinks and cordials. Edward emphasises the “not from concentrate,” a key requisite for brands like Innocent drinks and some Marks & Spencer products, provides flavour and aroma best served by local production. Careful analysis of taste profiles ensures the right bushes are planted including a new blackcurrant variety, Pixley Black, which Edward sought out to counter the effects of climate change and our warmer, wetter winters. Thankfully, it has also proved hardy in the last two, trend-bucking, very cold winters. Unsurprisingly, given his background, Edward has invested in new machinery enabling Pixley to do all its processing at its own pressoir. “It was a huge decision in 2003 – massive,” says Edward, hinting at the cost. “But now we can control the quality, which we wouldn’t be able to do if we outsourced. Most of the fruit is processed on the day it is harvested.” It’s a testament to Pixley’s products that one of their largest overseas customers, on spotting Edward in the audience at the spring International Food & Drink Event, introduced him by announcing: “This man makes the best blackcurrant juice in the world.”

Click here to find out more about Pixley Berries

To find out about HEFF and the producers it supports, please click to visit the HEFF website.